California seems to be heading towards greater density and zoning regulations. The New York Times reported that it appears that legislation allowing duplex is on what ordinarily would’ve been single-family zoning lots will soon be past and change the potential outlook for single-family zoning in that state. Take a look at this article.  While higher density in many of our urban areas is certainly a desirable result, and more suburban, let alone rural areas, it would seem to be unnecessary and most likely bound to attract vehement opposition.
As I mentioned in an earlier entry, in other urban areas, certainly Nashville, we seem to be headed in a somewhat different direction. When Nashville first adopted zoning back in the early part of the 20th century, all residential areas were permitted duplexes, that is, there were no single-family residential districts per se. Certainly you could have a single-family home but that’s only district would also allow a duplex.
Over the last 40 or 50 years, we have moved in the other direction, adopting a series of new zoning district switch permit only single-family residences and exclude duplexes or more than one home on a single zone lot.
Posted by George Dean at 6:00 AM No comments:

Last week, Judge Robert E. Lee Davies, appointed as a Special Judge, ruled that the short-term rental regulations in the city of Hendersonville were unconstitutional. The regulations are a little unusual in that they entirely preclude the use of short-term rentals in residential zoning districts.  There have not been too many cases here in Middle Tennessee dealing with these short-term rental issues (other than in municipal courts). This may be a significant case as it heads up to the Tennessee Court of Appeals.

The other interesting aspect of the case is that while the court found that the short-term rental zoning regulations met the rational basis test, it concluded that the ability to lease, or short-term basis, property to others was a fundamental constitutional right, and applied the compelling governmental interest test  concluding that the city did not demonstrate compliance with that heightened standard. I don't know of any other cases which have concluded that the right to lease property in this manner would be a fundamental constitutional right. I think it is unlikely on appeal that the Court of Appeals will agree with that proposition. In fact, since zoning laws so often impact property rights, concluding that some or all of zoning regulations have to comply with the strict scrutiny standard would lead to the invalidation of many zoning regulations across not only Tennessee but in any jurisdiction which reach that result. Just for an example, the subject property in this case is zoned residentially. That means that you can't lease it to a commercial or industrial use either. That means that the owner of the property can't use it for a commercial or industrial use. Is that a violation of any fundamental constitutional right? Both the US Supreme Court and the Tennessee Supreme Court have concluded that such regulations are entirely appropriate and meet the rational basis test.

In fact, in the leading federal case, Euclid v Ambler Realty, the US Supreme Court spent several paragraphs detailing the harmful impacts of apartments on surrounding residential properties. While the court's view in that case is certainly antiquated by modern standards, some of the concerns articulated concerning long-term rentals are certainly now reflected in the concerns regarding short-term rentals.

It seems likely that the Tennessee Court of Appeals would conclude that the rational basis test applies. For example, in Anderson v Metro Nashville, 2018 WL 527104 (Tenn. App. 2018), the court  concluded that a 3% cap on non-owner occupied short-term rentals was a monopoly but one which was justified because it "clearly b[ore] a legitimate relation to a valid end," basically the same test as the rational basis test. This does not necessarily mean that the Hendersonville short-term rental regulations would be upheld; while it is certainly unusual for a governmental regulation to be invalidated based on the rational basis test, the Court of Appeals could certainly so conclude. Having said that however, it would seem unlikely.

Political Signs in the Front Yard

An interesting byproduct of the seemingly always intense political discussion of the last several years here in the United States, is the posting of political signs supporting one or the other candidate, and using profane language to attack the opposition. I’ve attached an example with some of the more extreme language blocked out. 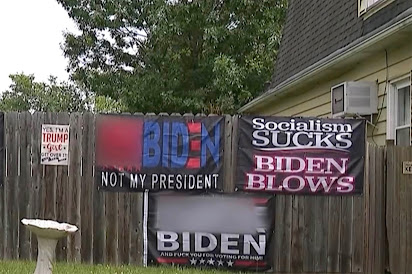 As you can imagine, these kinds of signs provoke heated responses from neighbors and passersby. In Roselle Park, New Jersey, the signs were in a residential front yard, not too far from a public school. Evidently the mayor received a number of phone calls and the codes official wound up writing a citation. The owner of the property lost in Municipal Court, but on appeal to Superior Court in New Jersey, the decision was reversed.

Relying on that Supreme Court precedent, the Superior Court New Jersey also reversed the decision from the Municipal Court against the property owner. The use of the profane language was within the protections afforded by the First Amendment to the Federal Constitution.

There have been several these cases across the country, including one right here in Tennessee, in Munford. In that case, the minutes will attorney advised the city that the use of the language was protected and that there was no violation of the city codes. It’s good to see local counsel here in Tennessee getting it right!

Berkeley California made news within the last week or so and announcing that it is planning to phase out zoning districts which allow only single-family residences. It appears as though they would simply amend the zoning regulations to allow other types of housing in those districts, but the possibility of eliminating single-family residential zoning can seem pretty fantastical. See a local news item here.

Several other jurisdictions across the country have also analysis similar efforts. Minneapolis culminated a multiyear effort to accomplish the same objective in the last year or two. Take a look here.  Other cities are considering similar efforts.

It is interesting to consider these efforts in the context of Nashville and other Tennessee cities. While I certainly don't expect that Nashville or for that matter, any of the other large cities here in Tennessee would consider eliminating single-family residential zoning, viewed in a historical context, there is an interesting twist. When I started practicing law in Nashville in 1979, and I clerked while I was in law school for the Metro legal department in 1978, there was no single-family zoning in the city. The least intensive zoning districts for residential (as opposed to agricultural) purposes, R40, allow both single-family and two-family dwellings on lots which had to be 40,000 square feet or larger. In fact, all of the zoning, R20, R15, R10 and so forth, allowed duplexes.

I asked one of the planners who worked at the Metro Planning Commission at the time, Bob Pasley, why it was that these zoning districts which in other cities would have been single-family only, also allowed duplex residences. Bob wasn't quite sure, but indicated that it was a historical anomaly that had simply carried through from the 1920s when zoning first started in Nashville.

It's generally agreed by most planners that single-family zoning contributes to urban sprawl, and of course, in the Berkeley instance, questions concerning racial inequality have added to the push to eliminate such zoning. Nevertheless, it will probably be a long time before we see it here in Tennessee in any of the large cities. But it is interesting that zoning here in Nashville started off by allowing duplex residences in all or virtually all residential zoning districts.

An amendment to the Tennessee Regional Planning Enabling Statutes was passed by the General Assembly in 2018, authorizing, without any explanation or definition, a regional planning commission to grant variances for subdivision applications. Tenn. Code. Ann. § 13-3-402(d). The language of the amendment is very simple although it may raise more questions than it answers:

A regional planning commission may grant variances to subdivision regulations, if such variances are adopted at a public meeting of the commission.

There are no standards provided as to when variances might be appropriately granted; the only requirement appears to be that the variances must be approved at a public meeting, and since virtually all meetings of regional planning commissions are open to the public, that element should be easy to overcome.

But do the same standards apply? In order to obtain a zoning variance, the applicant must show that the property is exceptionally narrow, shallow, or shaped, or subject to exceptional topographic conditions or other extraordinary and exceptional situations or conditions. Are those requirements also applicable in the case of variances from subdivision regulations?

It is impossible to tell. Perhaps the Planning Commission is supposed to adopt its own standards by which to judge whether a variance is appropriate. That would allow all kinds of different types of variances to be granted by different planning commissions across the state.

I should mention that most Planning Commissions have over the last 20 years or so been granting variances to the subdivision regulations in any event. I assume that the statute was passed because somewhere in Tennessee a case was appealed and the local court may have concluded that the planning commission did not have the power to grant a variance since it was not enabled by state statute. I am sympathetic to that argument; from my perspective, planning commissions don't have any independent power which is not vested by a statute adopted by the General Assembly. That has not however stopped planning commissions from granting variances to the subdivision regulations.

On the other hand, since the Planning Commissions pretty much adopt their own subdivision regulations, the members of the commissions would be in the best position to judge how those regulations should be administered and enforced, and if they feel that a variance is appropriate, perhaps that's not too much of a stretch.

I always think back to the Hamilton Bank versus Williamson County Planning Commission case where the US Supreme Court at least seemed to imply that the planning commission itself could grant variances to their subdivision regulations and that one of the reasons that the case was not ripe for constitutional consideration was the fact that no variance had been applied for. But since planning commissions in Tennessee back then did not have any power to grant variances, at least not enabled by state statute, the Supreme Court's decision in that regard seemed a little amiss.

Frankly, from my standpoint, it's not clear to me that planning commissions of any type should be permitted to grant variances. But assuming that regional planning commissions are given the power, then surely municipal corporations should have been enabled to do so at the same time.