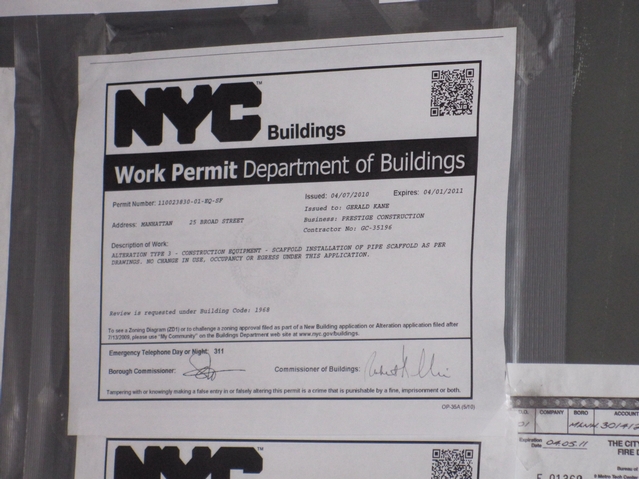 In late February of this year, New York City Department of Building Safety announced that it would be providing QR codes on its building permits so that anyone walking past a construction site could obtain information related to the property and construction via smart phone. While most of this information is already available on the department website, this instant access will certainly lead to increased complaints and increased litigation. Notice the QR code in the upper right hand corner of the work permit.

It won't be long before smart phone access to such information will be available all over the country.
Posted by George Dean at 6:00 AM No comments:

Joining an Original Action with the Common Law Writ

Recently, the Tennessee Court of Appeals handed down its decision in Murfreesboro v Lamar Advertising. This is an enforcement action by the city against the sign company to prevent the continued use of an electronic sign constructed illegally. Lamar had previously appealed the city order requiring discontinuation of the use of the sign; 2010 WL 1742077 (Tenn. Ct. App. April 30, 2010) perm. app. den. Dec. 7, 2010. The trial court in this enforcement action concluded that it was barred by the doctrine of prior suit pending. The Court of Appeals reversed, "The two cases do not involve the identical subject matter, and the trial court thus could not have heard the issue the City raises in its complaint or granted injunctive relief in the certiorari proceeding."

This result seems clearly correct under current law. I write today to suggest that the rule that original actions cannot be consolidated with the common law writ makes little or no sense, and has no public policy justification. In Goodwin v. Metropolitan Bd. of Health, 656 S.W.2d 383, 386-87 (Tenn. Ct. App. 1983), the Court said:

Before considering the first issue, we wish to heartily condemn that which appears to us to be a growing practice, i.e., the joinder of an appeal with an original action and the simultaneous consideration of both at the trial level. This Court is of the firm opinion that such procedure is inimical to a proper review in the lower certiorari Court and creates even greater difficulties in the Court of Appeals. The necessity of a separation of appellate review of a matter and trial of another matter ought to be self evident. In the lower Court one is reviewed under appropriate Appellate rules and the other is tried under trial rules. In this Court our scope of review is dependent upon the nature of a proceeding. In this case one matter would be limited by rules of certiorari review and the other would be reviewed under 13(d), Tennessee Rules of Appellate Procedure. Like water and oil, the two will not mix.

The problem for me is that it is not self-evident why joining a so-called original action with an appellate action is somehow difficult. These cases are tried without a jury; even if there was a jury, the court could decide the cert issue and the jury the other claims. Why is that so difficult? Under the Tort Liability Act there is often a need to try a third party to a jury and the government to the court. How different is that? It seems very similar.

Furthermore, aren't there instances where allowing such cases to proceed makes common sense? Suppose there is a zoning board decision which depends on a zoning regulation that the petitioner thinks is unconstitutional. If the petitioner thinks proof is needed to demonstrate unconstitutionality, probably he must file a separate action to challenge the constitutionality. Why not challenge the zoning board decision and the regulation in the same case. Why can't the court figure that out? It's not difficult at all. In fact several of our cases suggest that the legal standard is the same. McCallen v City of Memphis.

There is already one exception: attorneys' fees. A claim under Section 42 USC 1988 for fees can be joined under the UAPA; certainly that holding would also apply to certs. So if the court can award attorneys fees, why not other types of relief?
Posted by George Dean at 6:00 AM No comments:

Back in August, I wrote a short note about the writ of certiorari as applied in Brundage v Cumberland County. Your can find it here. I complained then (and now) that the writ has outlived its usefuless, at least in terms of review of local government land use decisions. Actually, I have drafted a proposed bill to remove most of the hypertechnical details required in a writ of certiorari, to make review of local land use cases easier. I probably won't get it filed until next year (assuming I can find a sponsor), but it's an effort to simplify the process.

Just a few days back, I heard that the Tennessee Supreme Court has granted permission to review the Brundage case. Permission was granted on Feb 16th; it appears that the Supreme Court may weigh in on this issue. It seems an unusual case for the Court to take for review unless it wants to liberalize the appeals process under the Jackson Law. Perhaps the Court will conclude that the statutory writ is not necessary under the terms of the Jackson Law, and thereby eliminate some of the technical requirements associated with the statutory writ in appealing a local government decision under that law. Such a decision would not really have much impact on the vast majority of land use cases, and would only apply to cases arising under the Jackson Law itself, but hey, it's a start. Any small steps in the direction of making it easier to get a hearing on the merits is movement in the right direction.

We won't know what the Court has in mind until it issues its opinion, and of course, the briefs have yet to be filed. But this case should prove interesting. The decision of the Court of Appeals in the Brundage case may be found here: Brundage v Cumberland County.
Posted by George Dean at 6:00 AM No comments: