A Man and His Potty 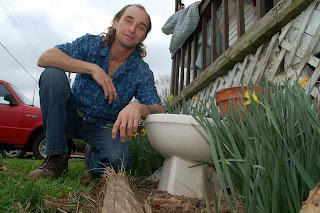 The old expression, “Beauty is in the eye of the beholder,” certainly applies in the context of code enforcement proceedings. In Oak Ridge, a week or so ago, a local homeowner named William Terry, was cited to court for a code violation because he had a planter made out of an old toilet filled with plants and potting soil. Terry contends that the toilet is an antique and a good way to recycle materials which would otherwise wind up in the landfill. City codes officials (and presumably some of his neighbors) seem to disagree. Katherine Baldwin, the city director of community development, said that “toilets are not something that people typically like to look at.” She said the city had launched a campaign to clean up unsightly areas.

The city officials and Mr. Terry squabbled over dictionary definitions of rubbish and toilets. The city attorney pointed out that according to Webster’s dictionary, a toilet is not a flower pot. Mr. Terry responded by pointing out that it didn’t fit the definition of rubbish either because it had been recycled and was not useless waste. The city judge observed that the codes enforcement officials always brought him interesting cases.

Mr. Terry said he was surprised at the amount of publicity his case received. Now, he said, "I might get two toilets and put them beside what you could call my driveway.''

Click here to  see Mr. Terry stating his case from the Knoxville News Journal.
Posted by George Dean at 6:00 AM No comments:

Who do you sue?

An interesting question which frequently comes up in land use planning litigation involves the identity of the proper governmental respondents to name in a petition for writ of certiorari. When I began practicing law some 30 years ago, the common method was to file against the members of the municipal board of zoning appeals, naming and serving each member individually. I have always assumed that the attorneys preparing these petitions felt that there was no power to sue or be sued in municipal or county zoning boards, and as a result, without that express power, a suit against the zoning board itself was in essence a suit against no one. For example, you could not sue the Metropolitan Police Department; it does not exist as anything other than a subsidiary of Metro Nashville.

Presumably, the same analysis would apply to a municipal or county board of zoning appeals. There is no power given to the board to sue or be sued. In a recent case from Wisconsin, Acevedo v. City of Kenosha, and City of Kenosha Zoning Board of Appeals, 2011 WI APP 10, this issue was squarely presented. The petitioner originally sued only the city, but when a motion to dismiss was interposed, the petitioner added the board of zoning appeals.

The court characterized the issue as whether the city was the proper party for a writ of certiorari challenging a decision of the board. The city’s position was that the petition cannot compel any action from the city, and as such, failed to state a claim against the city. The petitioner pointed out that old number of cases decided by the Wisconsin courts named only the municipality as a defendant challenging decisions of boards created by those municipalities. The Wisconsin Court of Appeals agreed that a number of lawsuits had been so filed, but distinguished those cases on the basis that this issue had not been raised and as a result there was no reason to rule on it at that time.

The court noted that WIS. STAT. § 68.13(1), a part of the Wisconsin certiorari provision, was of little help to the petitioner:

So what does this tell us about Tennessee? The right of review pursuant to certiorari in Tennessee is controlled by Tenn. Code Ann. § 27-9-101 which provides:

Anyone who may be aggrieved by any final order or judgment of any board or commission functioning under the laws of the state may have the order or judgment reviewed by the courts, where not otherwise specifically provided, in the manner provided by this chapter.

Note the similarity between this part of the Tennessee certiorari process and the Wisconsin statute quoted above. Tennessee provides further. Tenn. Code Ann. § 27-9-104 specifically addresses the “defendants” to be named in the petition. That section provides as follows:

The petition shall be addressed to the presiding Chancellor and shall name as defendants the particular board or commission and such other parties of record, if such, as were involved in the hearing before the border commission, and who do not join as petitioners.

Bolstering this argument somewhat is Rule 4.04 (6) which expressly provides for service of process upon the state of Tennessee or “any agency thereof,” by serving the Attorney General. Notice that the agencies of the state can be sued and served by service through the Attorney General. There is no similar provision for service on county or municipal agencies, boards, or commissions. So the question remains here in Tennessee, if you must sue the board of zoning appeals alone, how do you obtain service other than by suing each individual member, which seems anachronistic and, dare I say it, idiotic.

Well, as you can tell, I’ve given some thought to this matter over the years. It’s not clear to me why. When you play with zoning issues as much as I do in your practice, your mind seems to just conjure up these issues that frankly, nobody else in the civilized world really cares about. Having said that, it seems to me that there is a simple solution, and it is the one that I employ in all my zoning and land use litigation.

I simply name the city or county, and then tack on the words “acting by and through its Board of Zoning Appeals.” Such as, for example, “Metropolitan Government of Nashville and Davidson County, acting by and through its Board of Zoning Appeals.” Let’s assume for a moment that this strategy of actually suing the city or county is incorrect. Assume further, that the city or county moves to dismiss the petition based on a failure to name the correct parties. While it is certainly true that the Tennessee appellate courts have over the last 10 or 15 years developed hypertechnical requirements for filing petitions for writ of certiorari here in Tennessee, I simply cannot believe that any trial or appellate court would find that this manner of naming the city or county, acting by and through its board of zoning appeals, inappropriate. Even if I’m wrong, and the city or county should not be named, I think the court would allow the petitioner to amend the pleading. Furthermore, since the petition in almost all cases is served on the city or county attorney, and since in almost all cases of which I’m aware, the city or county attorney either defends or refers the defense of the administrative agency out to a private attorney, under the relation back doctrine of Rule 15.03 of the Tennessee Rules of Civil Procedure, the amendment changing the defendant from my designation, to a simpler designation of the Columbia Board of Zoning Appeals, should protect the petitioners right to proceed with the case even after the amendment. That is to say, one would expect that the Tennessee courts would allow the relation back of the amendment changing the name of the respondent to the time of the filing of the original petition, so as to avoid the expiration of the 60 day stature of limitations. The statute is of course jurisdictional; but again my feeling is that the court would certainly allow that relation back.