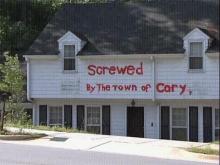 I have the most fun with the small sign issues and relatively uncomplicated sign cases. Bowden v. Town of Cary, 2010 WL 5071613 (E.D. N.C. Dec 7, 2010) is one such case. Already in a dispute with the city over a street widening, Mr. Bowden spray painted a simple sign in large florescent orange and pink letters on the white siding of his home, reading "Screwed by the town of Cary." The sign overall occupies approximately 48 square feet of the front exterior of his home. The town issued a Notice of Violation because only certain signs are permitted by the zoning ordinance in residential districts. In particular, the sign was in excess of 5 square feet and more than 42 inches in height. Mr. Bowden was given 72 hours to bring the property into compliance, otherwise he would risk a $500 per day fine. The photo to the right is from WRAL.com in North Carolina.

The court found the Cary ordinance similar to the sign ordinance declared unconstitutional in Metromedia, Inc. v City of San Diego, 453 US 490 (1981). The District Court was concerned that the various exemptions rendered the ordinance overall content-based as opposed to content neutral. For example, one of the exemptions included holiday decorations. The court pointed out that presumably "Merry Christmas to the Town of Cary" would be a holiday decoration and exempt. It would not make any difference how big the sign was, what size letters were used, what color of paint was employed, or any of those other relevant and interesting details. The city argued that the ordinance was in fact content neutral, but was unable to persuade the court given the exemptions and the similarity to Metromedia.

Applying the "strict scrutiny" test to the town's sign ordinance, the court concluded that it was unconstitutional. The court could not find any "compelling governmental interest" to justify the content-based regulation. Interestingly, the court noted that the Fourth Circuit Court of Appeals had previously held that neither aesthetics nor traffic safety are compelling governmental interests; the court had no choice but to invalidate the ordinance as applied to the plaintiff's sign. The court issued a permanent injunction preventing the city from attempting to enforce the sign ordinance against the plaintiff.
Posted by George Dean at 6:00 AM